Located in southeastern Europe, this is one of the most developing and fast-growing countries in the world. It shares its coastline with the black sea and is home to a variety of manufacturing industries and companies. Due to the good connectivity and transport system, this country has seen high growth in its economy and has attracted more companies to set up their units there. Bulgaria has one of the busiest airports in the world that handles huge air traffic from various parts of the world including passenger and cargo flights.

The Bulgarian trade has expanded and flourished in recent years. In the year 2019, the country earned a lucrative profit of $34.5 billion and $37.9 billion from its exports and imports, respectively. This has provided great opportunities for foreign trade expansion and has also helped to establish good friendly relations with the neighboring foreign countries. The employment opportunities have also increased and have provided a scope for the people to grow and expand in Bulgaria. The revenue generated from the per capita product exports and imports were 4.95k and 5.43k USD, respectively.

Bulgaria exports its finished products to the biggest nations in the world via Air and sea transport.

Germany holds the first position in the list with 14.7 percent of the total exports with a total value of 4.93 billion USD.

Next, we have Romania, which holds a total of 8.69 percent and a value of 2.9 billion USD.

Bulgaria exports a variety of products to foreign countries that are in high demand and are of premium quality. Electrical machinery is exported in bulk quantities that hold for 10.8 percent of the total export of Bulgarian goods with a value worth $3,666,994,800 (approx).

Motor Vehicle Parts and peripherals are also exported with a total value of $1,157,325,444. When it comes to food, cereals are exported in massive quantities that hold about 4.52 percent of the total Bulgarian exports. Plastics, ores, and non-knit apparel are also included as top exported products in Bulgaria’s export list.

Bulgaria imports a variety of products in bulk quantities that are required for the manufacturing of certain goods. These goods are imported via the air and the seaways as the countries are well connected to foreign countries.

Germany ranks at the top with 12 percent of the total imports that consists of a value worth 4.53 billion USD.

Next comes Russia and Italy that consists of 9.87 percent and 7.43 percent of the total import.

Romania, Turkey, and Greece are also included in the list with a value of 2.69 billion, 2.46 billion, and 1.74 billion USD. Not only that, China, Spain, Netherlands, and Hungary are also included in Bulgaria’s import countries list. These countries have helped to manufacture goods and products in massive quantities which are used by the Bulgarian people and few of them exported to different parts of the world.

Bulgaria imports raw materials and goods from its neighboring countries.

Oils and mineral fuels required by the industries are imported on a large scale that holds about 13.8 percent of the total Bulgarian imported goods.

Next electrical Machinery is imported from the foreign countries with a total value of 3.65 billion USD. Industry machinery, motor vehicles, and parts are also imported that hold value worth 3.49 billion USD and 2.58 billion USD, respectively. Plastic, Pharma products, ores, and iron and steel material are also imported in significant quantities and are included in the list of top import goods of Bulgaria. These products are of superior quality and last for a long time

Here is an infographic that explains the total goods export form Belgium and to which country, feel free to share it on social sites. 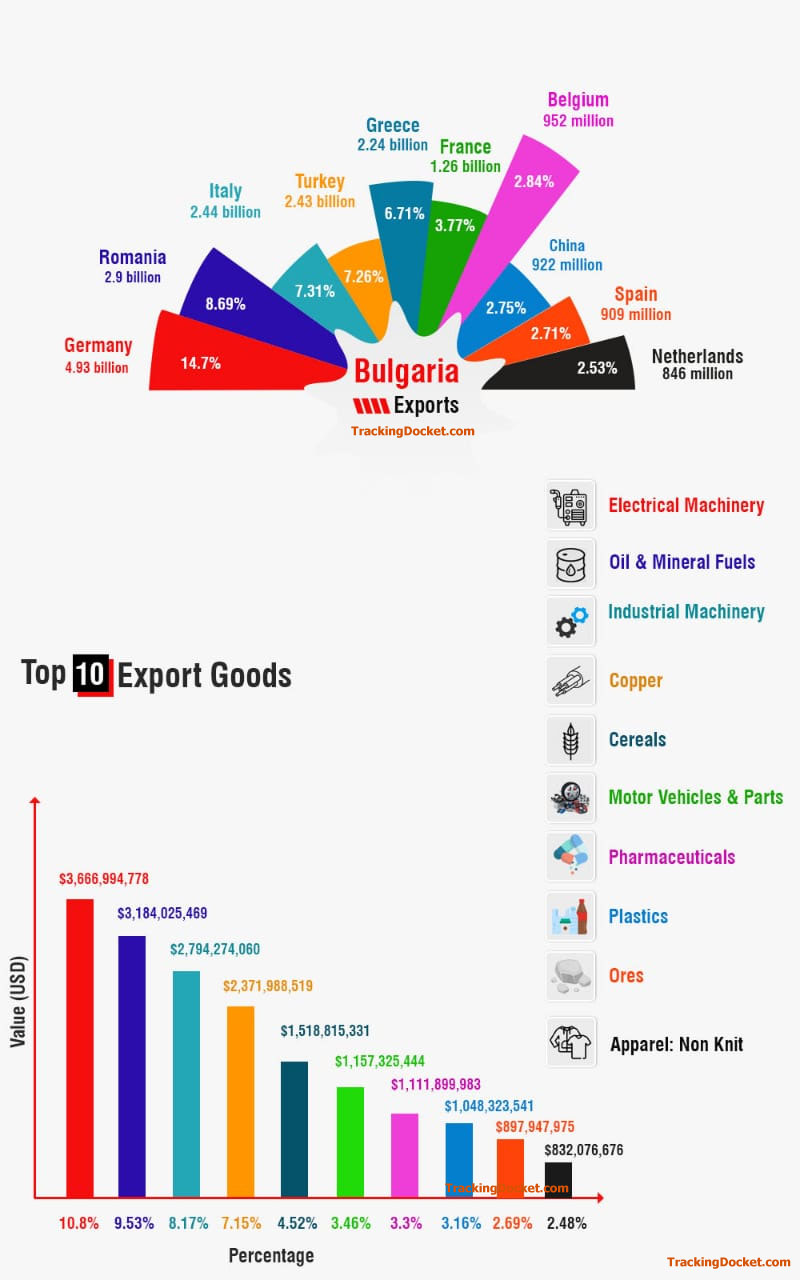 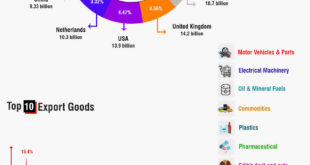