Portugal is a member of the United Nations and is recognized as one of the wealthiest nations in the world. Due to this, it has established a good network of routes of seaways via which goods and products are imported and exported to various parts of the world in bulk quantities. Portuguese’s rich culture and heritage have attracted many investors to set up new industries in the area. The availability of raw materials and skilled labor makes this place unique for manufacturing industries to set up new units. Due to the immense growth and development, overseas and international trade has flourished in Portugal in recent years.

The Portugal’s revenue of product exports and imports in 2019 was $67,064,074,000 and $89,541,378,000 (approx) respectively. The GDP stood at 222 billion USD nominal value in the year 2020. The profits earned from revenue of service exports and imports in 2017 were 32.8 billion USD and 15.6 billion USD. All these have led to the massive growth of profits in recent years in Portugal and have also helped to connect with the international industries. This has helped Portugal to establish friendly relations with foreign countries and has promoted overseas trade.

Portugal exports its finished goods and products to various countries all over the world. France is listed at the top with a value worth 48 Billion USD with 15.4 percent of the total country’s export.

Next Germany holds the second position with a value of 33 billion USD and accounts for 7.5 percent of the total Portugal export.

Italy and other European countries are also included in the export list. United Kingdom ranks 6th with a total export value of 14.2 billion USD.

They are followed by the USA which accounts for 4.47 percent of the total export. Other countries like the Netherlands, China, and Morocco are also included in Portugal’s top export countries. Morocco and China have an export value of 8.43 billion and 9.33 billion USD dollars respectively.

Motor parts and peripherals are exported in high numbers with a value of 48 billion USD and account for 15.4 percent of the total export goods.

Next Electrical machinery holds the second position with a value of 16.9 billion USD.

Oil and commodities are also included in the list that accounting for 3.98 percent and 6.28 percent of the total export goods.

Here is Portugal’s Top Exports goods list that is explained with the help of an infographic. Feel free to share it on social media sites: 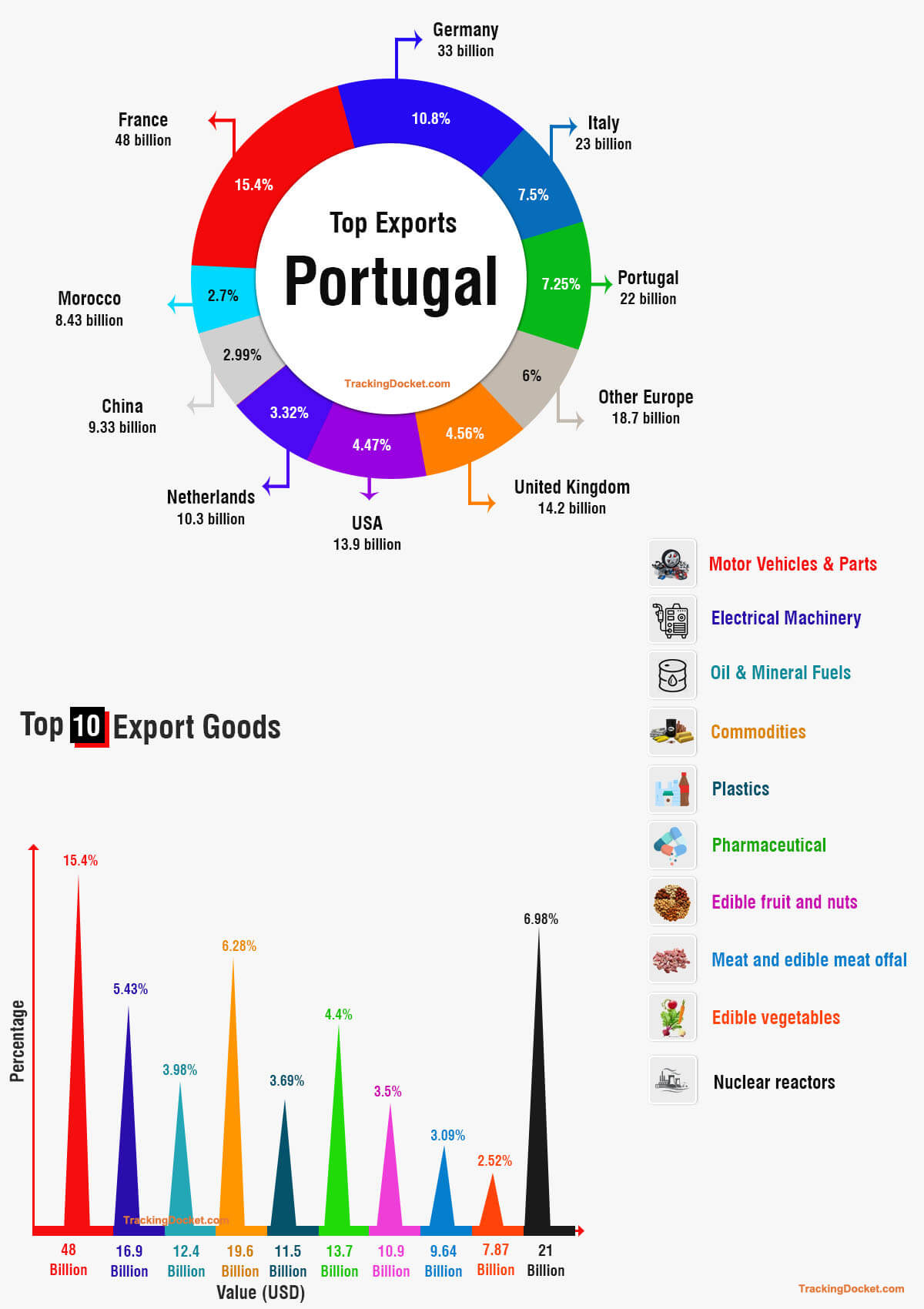