When it comes to export, Ecuador mainly sends goods like Crude Oil, Vegetables, Fruits, etc whereas in terms of import, they mainly order Mineral oils, machinery, electrical equipment, etc. Along with the two Central American countries of Columbia and Peru, Ecuador has the United States too as its major trading partner. However, there are other countries too that Ecuador does business with, including the Asian giants, China and Japan as well as Brazil and Venezuela in Latin America.

In terms of economic growth, Ecuador is holding the 69th position in the world.  In 2017, 42% of Ecuador’s GDP was attributed to trading. The figure has remained fairly consistent ever since. It is estimated that the Ecuador economy might not be showing any growth due to the global Covid-19 outbreak, however, recovery can be seen by the end of this year-end. The estimated 2021 GDP growth of Ecuador is estimated to be  4.1%.

What are Ecuador’s Main Exports?

The majority of the goods that Ecuador exports included Crude oil, Fruits, Fishes, Oil, and Flowers. Here is a quick overview of few top products that exported from Ecuador:

Bananas: Along with Costa Rica, Guatemala, and Columbia, Ecuador grows more than 100 million bananas, and the fruit accounts for 10% of the exports made by Ecuador. Being one of the biggest banana producers in the world, Ecuador sources its bananas from the Machala area in its southwest end. Ranging from baby bananas to green ones, Ecuador exports its bananas to the US, Russia, the European Union, Turkey, and China among many other nations.

Petroleum: Ecuador is South America’s 5th largest producer of oil with the United States being its largest importer. Having one of the largest oil reserves in South America, Ecuador has exited the OPEC to expand its export market beyond the US covering major economies like China. Ecuador’s oil export increased to 397.833 barrels per day in December 2019 from 371.210 barrels per day the previous year. While Ecuador was the smallest oil producer and exporter in the OPEC, the petroleum sector still accounts for 34% of Ecuador’s earnings through export.

Shrimp: With the demand for Ecuador’s chief crustacean export having doubled in China since the year 2005, the Asian giant has emerged as the largest importer of shrimp from Ecuador. With a deadly disease having depleted its own stock between 2009 and 2012, China today is heavily dependent on Ecuador for its shrimp consumption. There has also been an improvement in the quality of shrimp exported with an increasing refinement in consumer tastes in China. Ecuador exports nearly 61% of its shrimp to the Asian giant with Japan, the US, and the EU being other major importers.

Here is a quick overview of Ecuador’s top Export and Import graph that is explained with the help of an infographic, feel free to share this information on social sites: 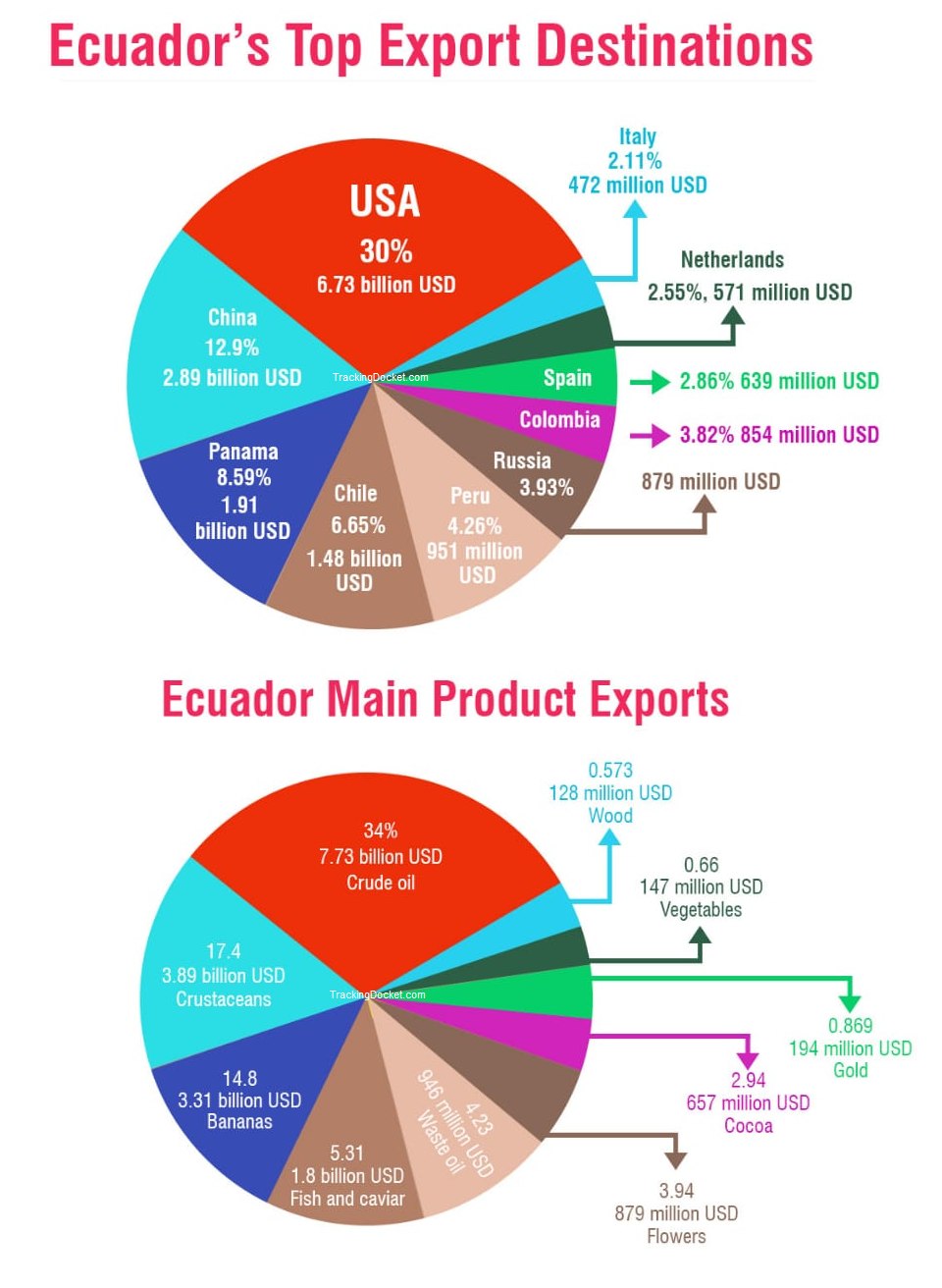 The tables given below give a clear picture of Ecuador’s exports to various nations.

In the year 2019 the total good exports from Ecuador were $22.9 Billion, whereas the Import figure was roughly $21 billion USD. However, the Import and Export volume was very less from the service sector, here is quick overview of the data:

Note: All figures are in USD.

Ecuador’s Import Goods from Other Countries

What % of Goods Imports in  Ecuador?

Ecuador is one of the major economies in Latin America ranked at 8th among the continent’s nations. Petroleum, bananas, and crustaceans remain its main exports. The nation is gradually and steadily trying to explore new markets with a focus especially on China. While the United States still remains its major market of exports, Japan, recently emerging China, and Brazil, Venezuela, Colombia, and Peru are the other big markets for Ecuador’s exports. As in the rest of the world, with trade activities having been halted in Ecuador after the Covid-19 outbreak, there was a temporary slump in the nation’s exports. The nation is now poised for a recovery.