Aircraft carriers are among the most potent battle tools for any army. They are an indication of the military might of a nation. These are mega-sized ships that double up as floating airbases. They have fully equipped flight decks and can arm, deploy, and recover fighter planes, besides carrying them.

Today, close to 15 countries globally have navies that have operational aircraft carriers. The majority of these are owned by the US Navy. Apart from the US, several other European & Asian nations possess one or more aircraft carriers each, of varying sizes and capacities. Below, we will take a look at the top 10 such carriers in the world.

Here I have listed the top 10 Aircraft Carriers in the World: 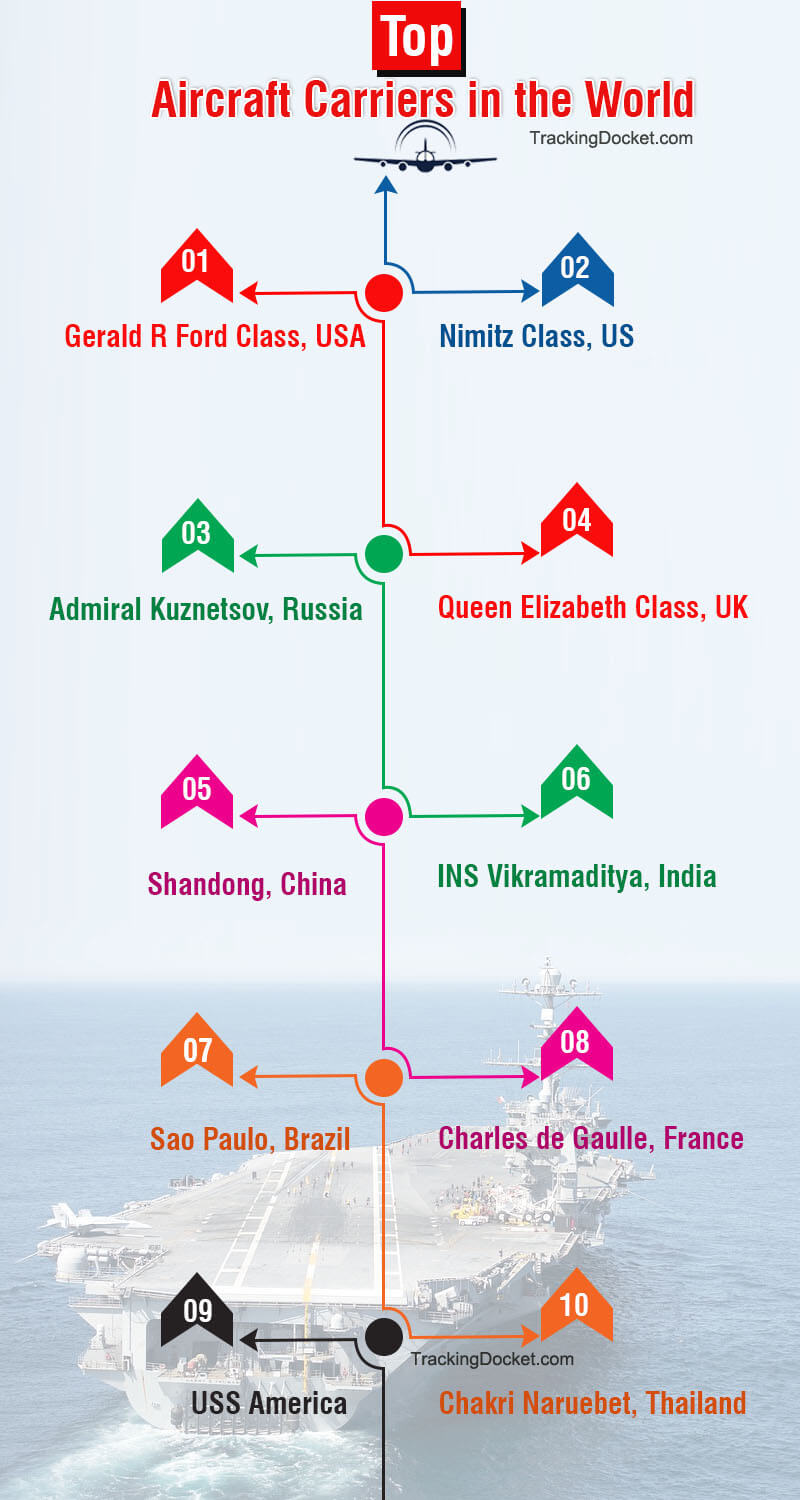 With a full load displacement of 100,000t, the Gerald R Ford Class is presently the flagship aircraft carrier of the US Navy and also the world’s largest. 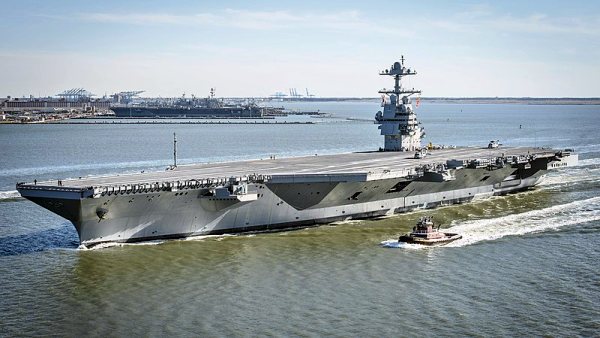 This category warship is the next-gen military vehicle of the US. The flight deck is 78 meters wide and can accommodate more than 80 aircraft, besides attack helicopters and unmanned aerial vehicles. Over 4,300 personnel can find a place on the ship. Two nuclear reactors power this mammoth ship that can carry close to 40 anti-ship missiles of varying destructive capacities.

Prior to the Gerald R Ford Class, the Nimitz Class used to be the world’s largest aircraft carrier with a displacement of almost 97,000t. With an active life capacity of almost 5 decades, these have proved to be among the most durable and dedicated warhorses of the US Army. 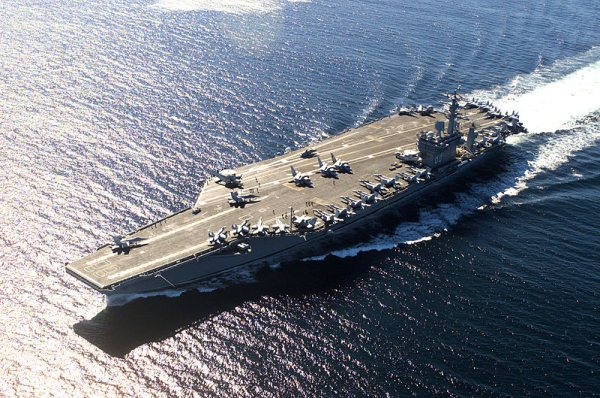 The Nimitz has a flight deck that is more than 330 meters long and can carry over 60 aircraft, in addition to almost 4,000 personnel. The fighter planes include Hornet fighters, Hawkeye, Greyhound, and Prowlers aircraft. A range of deadly missiles guards this ship against enemy weapons.

The Russian giant Admiral Kuznetsov is the nation’s only aircraft carrier. It is not as large as its American counterparts – but is no less deadly. With a 58,000t+ full load displacement, the almost-15,000 sq ft flight deck facilitates the operations of adept fighter jets like Sukhoi, MiG, and Su-25UTG/UBP STOVL fighter planes, along with Ka-27S, Ka-27LD32, and Ka-27PLO helicopters. More than 2,000 personnel can be accommodated on the ship. With a top speed of more than 30 knots and a well-stocked armory of deadly rocket launchers and anti-ship missiles, the Admiral Kuznetsov is a much-respected – and feared – aircraft carrier.

For the UK’s Royal Navy, the Queen Elizabeth Class aircraft carriers are the pride of possession. 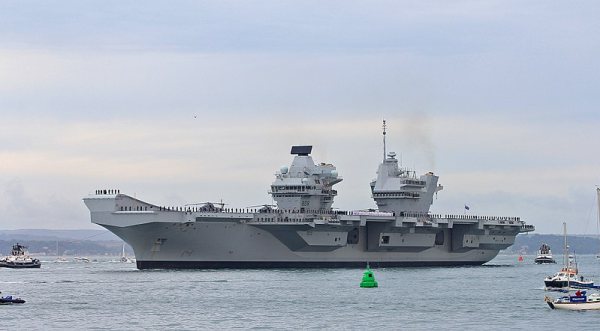 With a 65,000t full load displacement, these massive ships can strike terror in the hearts of the enemy – with their capacity to carry more than 40 aircraft and armed with the latest Phalanx CIWS and other missiles. Two gas turbines and 4 diesel engines power this mammoth vessel. It can reach up to a top speed of 25 knots.

The erstwhile Soviet Union’s unfinished battleship Varyag was sold off to China when the former collapsed in 1988. After much reworking and restructuring, the project took shape as Shandong – China’s premier aircraft carrier. The country’s first indigenously developed aircraft carrier, the Shandong can accommodate up to 44 aircraft, along with an assortment of naval helicopters and early warning helicopters. Fitted with a battery of mid and short-range weapons, the Shandong is one of the major players in the naval battlefield of the region.

The INS Vikramaditya is India’s largest warship, commissioned in 2013. It comes with a displacement capacity of more than 44,000t. More than 30 fighter jets of varied hues like MiG, Kamov, Chetak, ALH-Dhruv, etc. can operate from this mega-ship. 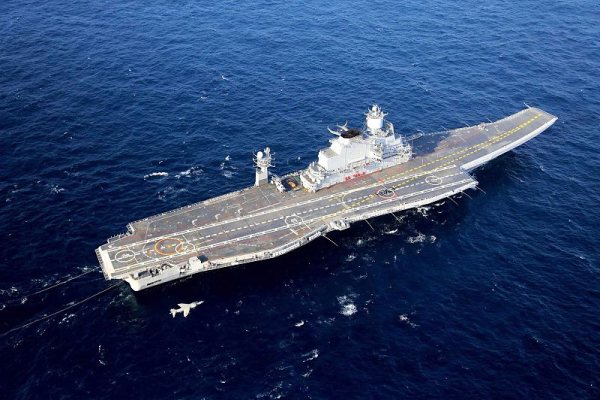 Armed to the teeth with various categories of air-to-air, ship-to-ship, ship-to-air missiles, rockets, and bombs, the Vikramaditya commands immense respect from all the countries of the world and provides India with a much-needed naval advantage in the politically turbulent neighborhood of the country.

Also, find the deepest Part of the Ocean.

Commissioned in 2000, the Sao Paulo is among the most powerful aircraft carriers around – powered as it is with 6 boilers that generate 126,000shp and a maximum speed of 32 knots. It has a full load displacement capacity of 32,000t and is able to carry up to 40 aircraft that are a mix of fighter planes and helicopters. More than 1,900 crew members can find a place together aboard the ship.

Named after one of France’s biggest heroes, the Charles de Gaulle is the crowning glory of the French navy. The nuclear-powered battleship is the only one of its kind outside the US. It also carries the distinction of being the largest warship in entire Western Europe. The ship can displace 42,000t at full load and can carry 40 aircraft, including deadly planes like the Rafale M, Super Etendard, Hawkeye, etc. It can also accommodate almost 2,000 crew members.

This is an amphibious assault ship of the US Navy. It was commissioned in 2014 and has a full load displacement capacity of 45,000t. it is quick and deadly, armed as it is with V/STOL aircraft and attack helicopters. The hybrid-electric propulsion system provides sufficient power to the warship that is a welcome addition to the already burgeoning US Navy fleet.

The Spain-built Chakri Naruebet started serving the Royal Thai Navy in 1997. Amongst all the Southeast Asian countries, Thailand was the first one to commission an aircraft carrier. The warship can accommodate a range of fighter planes & helicopters like the AV-8S Matador, Sea Hawk, Chinook, etc. A battery of short-range missiles makes this ship a tough opponent to encounter in short-range. Operations are underway to acquire more defensive weapons to make the ship even more competent. 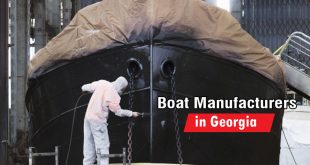 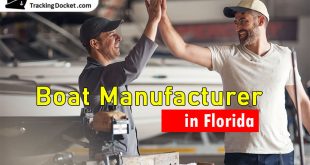 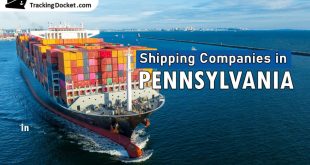 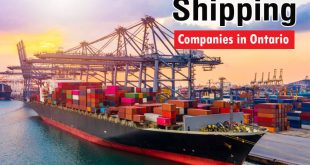